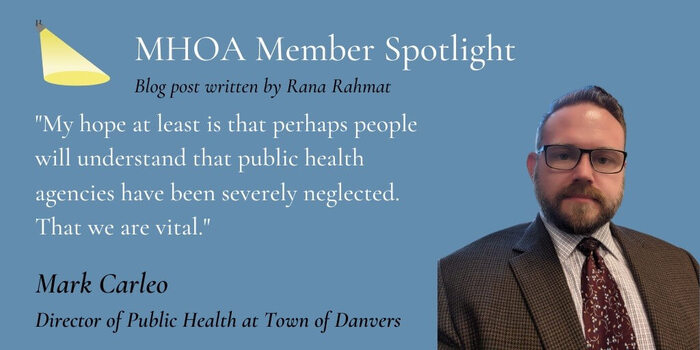 Each person that ends up in the world of public health takes their own path to get there. I recently had a chance to sit down (virtually, of course) and chat with one of these individuals with a unique history: Mark Carleo, the Director of Public Health for the Town of Danvers.

Mark’s journey into public health is a particularly interesting one. He was originally training to be a chef when Massachusetts adopted new food safety regulations around the year 2000. Due to these new regulations, Mark took a food safety course, started an internship with the Danvers Board of Health, and continued working towards a degree in food science. During the internship he repaired, expanded, and built up their databases, and eventually became an Environmental Health Inspector in Danvers. His career progressed from there, and eventually he found himself as the Assistant Director of Public Health, where he was primarily involved with environmental health.

These experiences lead Mark to his current position as Director of Public Health in Danvers. However, it has been an unusual start to his promotion. He was appointed as the Director on March 16, 2020, six days after a state of emergency was declared in Massachusetts in response to the COVID-19 outbreak. As such, he has spent his tenure as Director in a public health emergency.

Of course, I had to ask Mark about how the pandemic has impacted his work, and the projects he had hoped to work on in Danvers. According to him, the pandemic has impacted various aspects of his job, from affecting budget goals, to altering the course of some bigger projects he had planned on initiating once in the new position. Despite all the difficulties that have come about as a result of the pandemic, he hopes that the future of the job doesn’t change permanently, and that things can return to normal — especially since his favorite aspect of the job is “just getting out, and interacting with people.”

I also had the chance to discuss with Mark how the MHOA has been helpful both before, and during the pandemic. He finds the trainings and educational programs for those in public health, which are major components of the organization, to be very helpful. Another valuable aspect of the MHOA has been their information distribution, and the networking ability they provide. When Danvers required assistance with data entry for MAVEN (Massachusetts Virtual Epidemiologic Network) at the beginning of the pandemic, the MHOA’s connection to the Academic Public Health Volunteer Corps was a useful resource, since they can provide volunteers to work on such projects. While the issue was resolved without the help of the volunteers, for leaders in local boards of health such as Mark, it is reassuring to reach out to the APHVC and receive a quick response.

Despite the darkness, there is still light for public health at the end of the pandemic tunnel. For Mark, it involves a new outlook on public health. “My hope at least is that perhaps people will understand that public health agencies have been severely neglected. That we are vital.”

It cannot be all about work though, so I also got to chat with Mark about how he has been spending his free time during the pandemic. While he is not going out much, he has had the opportunity to catch up on some reading. His current read? Superbugs: The Race to Stop an Epidemic by Dr. Matt McCarthy, a story of science and a race against time to stop antibiotic-resistant bacteria.